Over the past two years, there has been talk among my fellow postulants about driving to the National Shrine of the Divine Mercy in Stockbridge, Mass.  But an eight-hour round trip to the shrine couldn’t fit into our academic schedule.

Meanwhile, my mother had to scrap our ambitious summer road trip to Canada because of her health concerns.  But she has preferred shorter day trips.  In early June, she suggested attending the 10:30 a.m. Sunday Mass at the shrine.  The six-hour round trip from New York was doable.  I was seeking a break from the usual Sunday routine.

We would have driven up on June 12, but my sinus issue was plaguing me.  (You can read about my misery here.)

Feeling much better, I started the drive before 6 a.m. June 26.  We picked up Femie and Thelma, my mother’s longtime nursing friends.  They chatted during the drive with my mother chipping in.  I enjoyed being at the wheel and listening to Christian songs and Catholic hymns.  The navigation system in my mother’s car provided the straightest route to the shrine although that required taking secondary roads along Connecticut rivers and lakes.  Despite the twist and turns, the drive took roughly three hours after we picked up everyone, roughly the same time Google Maps predicted. 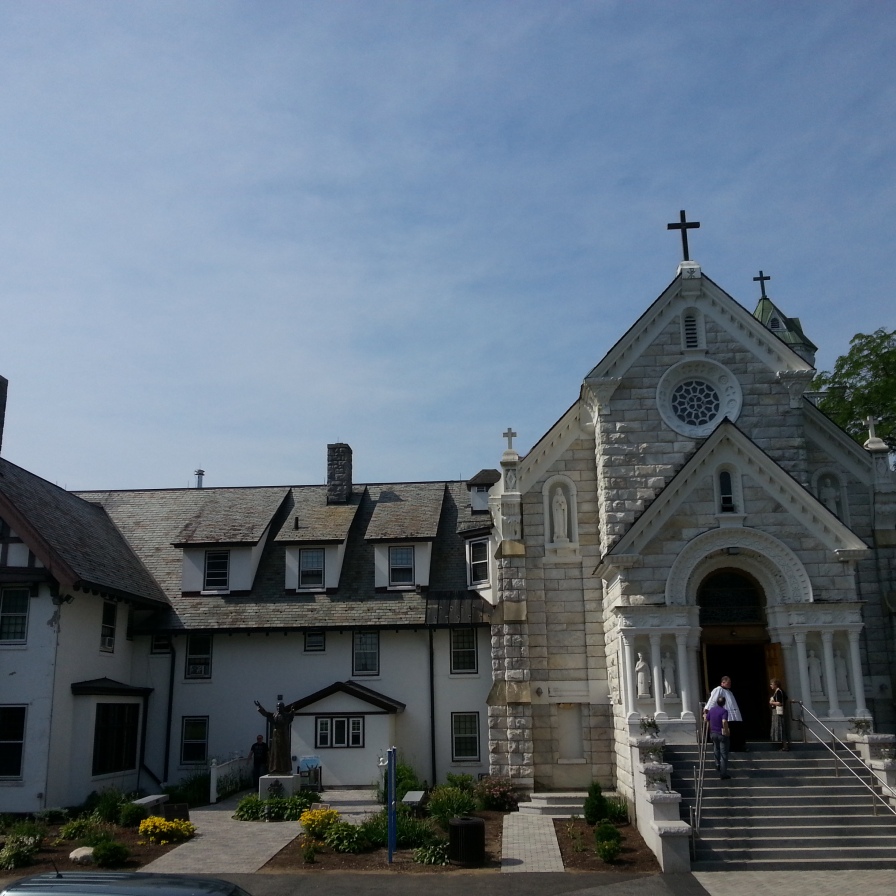 Visitors enter the National Shrine of the Divine Mercy in Stockbridge, Mass., on Sunday, June 26, 2016. 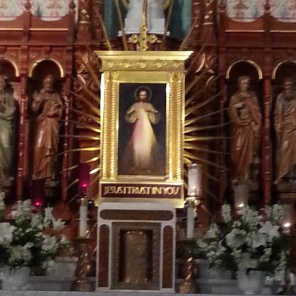 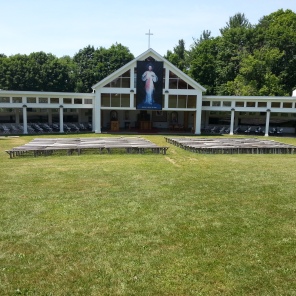 The Mother of Mercy Outdoor Shrine is the site of the giant Divine Mercy Sunday Mass in Stockbridge, Mass. 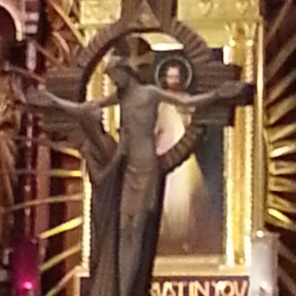 The crucifix displays the physical depths of Jesus’ love while the image of Divine Mercy shows the spiritual fruits of that love.

I found myself standing inside the shrine, the site of the familiar EWTN programs on the Chaplet of Divine Mercy.  The actual shrine was smaller than what I had imagined.  But what the footage didn’t capture was a special niche for a statue of St. John Paul II.  But I was too amazed by the image of Divine Mercy above the main altar to take picture of the statue.

I prayed the rosary and meditated before Mass.  The shrine was packed with ushers helping people find seats.  The liturgy was a breath of fresh air after enduring weeks of dubious liturgical practices.  The homily linked the radical nature of Jesus’ call to follow with His mission to fulfill and perfect the law.

The priest announced that there were extra copies of Father Donald Calloway’s book Under the Mantle: Marian Thoughts from a 21st Century Priest from a volunteer appreciation gathering.   The shrine decided to distribute them after the 10:30 Mass.  Another book on Mary?  Yes, please.  The four of us each picked up a copy.  I remember Father Calloway because of his appearance on ETWN’s “Journey Home.”

I prayed the chaplet and snapped a few pictures before rejoining the others.   Heading back to the car, I found the Mother of Mercy Outdoor Shrine used for the Divine Mercy Sunday Mass.  My mother had attended that Mass about five years ago on a bus trip.  She recalled the late arrival to the Mass, the field, the outdoor shrine, a food stand and the rush back to the bus.  She preferred this day trip to take our time.

We had lunch from all the food that my mother and her friends contributed.  I found a few postcards at the gift shop.  Although I was tempted to buy every book, I have enough reading material already.

Afterward, we stopped in Poughkeepsie, N.Y. to stroll the Walkway over the Hudson, a pedestrian and bike span converted from an abandoned railroad trestle.  I heard about this bridge in Daniel James Brown’ book The Boys in the Boat.  You can read my brief commentary on it here.  The bridge was the finish line for the annual national rowing championship races in the early 20th century.  I looked down to the river on which the 1936 University of Washington varsity rowing team began the charge toward Olympic gold. 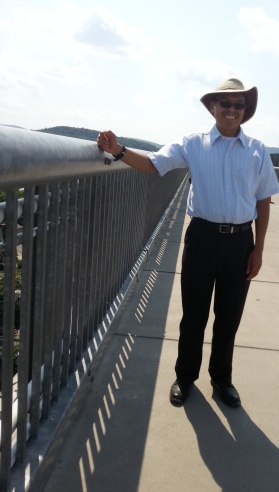 I wished I had brought sunscreen during my stroll along the Walkway over the Hudson in Poughkeepsie, N.Y., on Sunday, June 26, 2016. 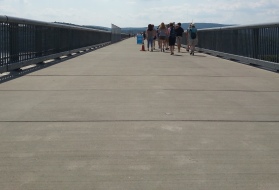 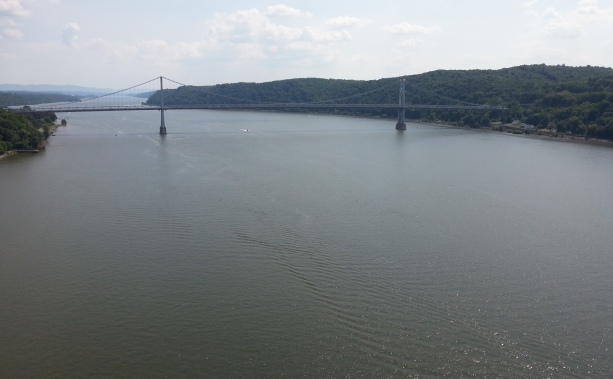 The Hudson River from the south side of Walkway over the Hudson in Poughkeepsie, N.Y., on Sunday, June 26, 2016. The 1936 University of Washington varsity rowing team glided underneath the Mid-Hudson Bridge toward winning the national championship.

The Hudson River from the north side of Walkway over the Hudson in Poughkeepsie, N.Y., on Sunday, June 26, 2016.

Seeing how long the walk was, my mother turned back when she glimpsed the river.  I quickly regretted not bringing sunscreen.  I snapped pictures when I was halfway across the river before heading back.  Femie and Thelma met me about a third of the way across.  The navigation system gave a simple and familiar route home.  Twelve hours after we started, my mother and I pulled into the driveway.  This small trip helped me satisfy my travel bug … for now.