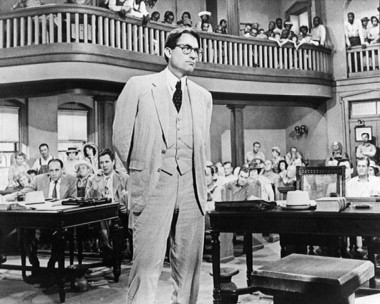 A few weeks before the controversy over the release of Harper Lee’s “Go Set a Watchman,” I found a showing of the classic 1962 film version of “To Kill a Mockingbird.”

I had seen the movie as a kid with my mother, who has loved classic movies.  I have read the book many times during my school years.  The film and book paint the ugly racial realities in 1930s America from the view of Scout as a young girl and as an older woman.

Although Atticus Finch, Scout’s father, might be viewed as a hero in a lost cause, Scout, Jim and Dill are the ones who saved Atticus and Tom Robinson, his client, from an angry mob.

It’s interesting how the scene moves from anger to uncomfortable to shame to calm.  To combat evil required not force but a child’s innocence and love.  Maybe that’s the beginning to the answer.

I hadn’t planned to read “Go Set a Watchman.”  I personally didn’t care whether “Watchman” revealed that Atticus had deep-seated racist beliefs.  But L.A. Barntiz’s recent blog on “Watchman” had made me reconsider picking up the book.

At the end of her entry, Barnitz raised two questions: “Will Scout remain true to her ideal best self or sink back into the comforting behaviors and sentiments of those she outgrew years earlier?”  In my comment, those questions can be applied to us: “Are we going to despair and surrender our ideals? Or are we going to strive to live up to those despite the many falls and disappointments?”

I posed an idea in my comment that I would like to explore: “Maybe we need both type of books: one to set the ideals and the other to test how we measure up.”

The past few decades have seen the rise of many books, films and TV shows that have twisted, parodied and played off the classic fairy tales.  Some of these are very good.  But we have spent so much time making fun of the classics that we have failed to look back and appreciate the classics.  One of my former co-workers commented that she had seen all the films spun off from “The Wizard of Oz” but she never watched the original.

We revel in overturning ideals and high standards, but how do we know that we are progressing or growing without them?  People failing to reach those ideals never negate them.  As far as I can tell, America still strives for racial harmony.  It means that plenty of work remains for us.

Even if it’s true that Atticus had racist beliefs, doesn’t that make his efforts in “To Kill a Mockingbird” more noble because he was able to set those beliefs aside briefly to defend Tom Robinson to the best of his ability?

One thought on “Book and movie reflection: “To Kill a Mockingbird””